The Fight or Flight Response: What’s Really Going On? 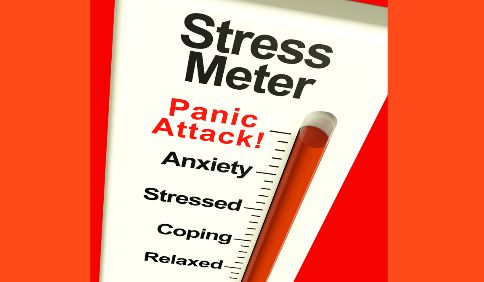 Do you know when your body is moving into what is known as the fight or flight response (otherwise known as the stress response)?

It can be a fine line between feeling relaxed and coping, to suddenly feeling stressed.

It can also be a very clear divide between feeling relaxed and feeling stressed and you may find that you are in a state of permanent stress!  Not good!!

What Exactly is the Fight or Flight Response?

You’ve probably heard this fight or flight term bandied about at some point, but I wonder how much you really do understand about this.

A few years back when I reached my lowest point, I certainly was not giving any credit to the way in which repeated stress was affecting me, ie the way in which the fight or flight response was being activated in my body over and over again.  The result was severe adrenal fatigue.

The fight or flight response is a very human, physiological response that has been a part of our human systems since forever.  The analogy of the tiger chasing you has often been used, ie when you see a tiger chasing you, the body responds by preparing your system to either run (flight) or fight.  Your body will do such things as:

All of these things are preparing you to have a greater, heightened awareness and an increased ability to respond so that you can do what you need to do to survive!

Fight or Flight in our Modern Day World

The thing is, the chances of you being chased by a tiger or a lion or a shark for that matter are pretty low.  While yes it does happen to some people, for the majority of us it doesn’t.
BUT
this doesn’t stop our fight or flight response going off in all kinds of situations in our modern day world, and I am wondering if you realise just how many of these situations are affecting you.

Let me share a study that Herbert Benson MD shared in his book “The Relaxation Response” which may help to give you some perspective on the kind of so called “normal” things that we don’t think have any kind of effect on us.

This study was performed by a Czech scientist, Dr J Brod and his associates.

Herbert Benson MD went on to explain in his book “The Relaxation Response”,

“Situations that require behavioral adjustment can lead to specific physiologic changes, which bring forth the fight or flight response.  We are all basically the same human organism, which responds to stressful events through this common, innate response.  We may differ in what is stressful to us individually, depending upon our own value systems, but our society poses enough stressful circumstances to affect all of us.

When a single situation requiring behavioral adjustment occurs again and again, the fight or flight response is repeatedly activated.”

There are so many situations in our modern day world that can activate a stress response and it’s not something to be taken lightly.  The problem with this is that when it does happen we don’t tend to run for our lives or fight.  We most often take on a very passive response and end up with these chemical changes festering around inside of our body with no chance of release.

We are definitely all unique in what affects us, but not unique in the way our bodies respond to stress.

What are the Solutions?

While I don’t believe it is possible to completely eradicate things in our lives that may cause us stress, there are definitely many things we can do to unravel our mind, body and emotions.

1.  Activate what is known as the Relaxation Response 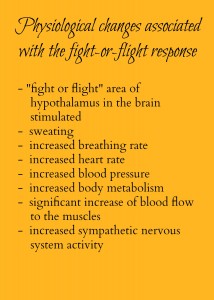 Herbert Benson MD, a Harvard doctor, studied the concept of the relaxation response and released a book on this topic way back in 1975.

He discovered through many experiments that meditation was one of the most profound ways to do this and he concluded that there were 4 main things that we need to do to activate this response.

a.  Create a quiet environment.

b.  Create an object to dwell upon.  This can be a word to repeat, gazing at a symbol or concentrating on a particular feeling.

c.  Create a passive attitude, i.e. letting your thoughts slide by without giving attention to them.

d.  Be in a comfortable position.

His teachings were really quite profound and he was a forerunner in the field of mind/body medicine at a time when the medical profession had a very strong separation between the mind and the body.

He researched a lot of the religious and spiritual concepts relating to meditation but he also discovered that this was something that could be done by anyone, no spiritual or religious beliefs were needed as this was an innate physiological response created in the body.

I urge you to balance out the stress that’s created in your life (ie your body creating a fight or flight response) with creating situations (eg meditation) that will bring about a relaxation response, and do this every day.

Understand that you will stay feeling stressed when you are not doing something that creates a relaxation response in your body.

Do you really want to let the fight or flight response run your life?

2.  Look at Making Changes with the Patterns in Your Life that are Creating Stress

Many of us have over time developed habitual ways of responding to situations, many of which have occurred since early in our childhood.

There are many tools and modalities available today to help to undo some of these patterns and set about creating new ones.  Some of these include:

It’s important to find the right kind of tool that resonates with you, but most important is that you do take steps to make changes in the way you are habitually responding in your life.

This is not an overnight process, but change can begin TODAY!

I wish you well.